Jacks are commonly used lifting devices. There are many different types of hydraulic jacks, and they use a variety of different kinds of technology.

But what exactly are they and how do they work? 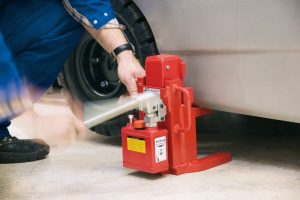 What Is a Hydraulic Jack?

A hydraulic jack is a device that uses hydraulic fluid in order to lift heavy loads. Its main component is a cylinder, into which hydraulic fluid is pumped. The resultant pressure created inside the cylinder then pushes up the plate of the jack, which is capable of lifting extremely heavy objects.

The inner workings of a hydraulic jack are explained below in greater detail:

Oil is typically used as the hydraulic fluid, as it also lubricates the components of the jack, ensuring everything is in working order.

Pascal’s principle states that if a force is applied to a fluid in an enclosed space, the force is transferred equally throughout the entire fluid. This means when the pump is activated, there is a build-up of pressure inside the cylinder. Once it reaches a certain level, it seeks the easiest means of escape, which is by pushing up on the jack’s plate. The pressure is so great that it exerts a tremendous amount of force on the plate, causing it to move upwards, as well

as any heavy load that rests on top of it.

The cylinder is designed and built specifically to cope with the extreme build-up of pressure inside it. Any structural failure in the cylinder or the one-way valve can cause the hydraulic jack to collapse.

In order to release the pressure build-up inside the jack, the one-way valve can be simply released. This allows the hydraulic fluid to flow back out of the cylinder, and the plate to return to its starting position.

There are 2 main types of hydraulic jack: floor jacks and bottle jacks.

Also known as garage jacks or car jacks, floor jacks are used primarily to lift objects from the floor.

Bottle jacks are named after their long-necked bottle shape. They are particularly useful for squeezing into tight spots and are commonly used in construction work.

Hydraulic jacks can be used for a variety of different lifting purposes. By exerting pressure on a hydraulic fluid within an enclosed space, they are able to generate enough force to lift extremely heavy loads.